THIS ANALYSIS IS CONTINUED FROM PART 3. FOLLOW ALONG ON THE AUDIO CLIP FOR QUESTION 2. 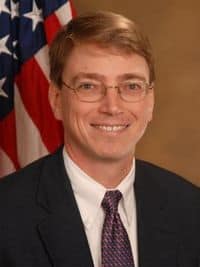 As we have discussed, the single consolidated case of Obergefell v. Hodges raised two legal questions. The first question, which we have been discussing, is whether the Fourteenth Amendment prohibits States from banning gays from marrying. The second question, inspired by several plaintiff couples who married in one state but live in states that do not allow gays to marry, asks whether the Fourteenth Amendment allows a states to refuse to recognize valid marriages performed out of state.

A few preliminary notes before we get to the argument:

The argument lasted a little under an hour. Doug Hallward-Driemeier (above, right), an accomplished Supreme Court practitioner, argued for marriage equality. Mr. Hallward-Driemeier, like his colleague Mary Bonauto, did a fine job under difficult circumstances. Ms. Bonauto had a hotter bench. Compared to both, Mr. Joseph Whelan (right), Solicitor General of Tennessee, was an absolutely failure. He started his argument at about minute 24. He didn't know the law, made obvious mistakes on basic material, and had the justices asking questions as if Mr. Whelan were back in first year of law school. The first 10 minutes of his argument amounted to the justices challenging him on basic questions of law. Justice Breyer, often playing the role of the referee today, took a professorial approach: "what case says that", for example, When this happens, you know your day is going poorly.

The rest of the argument seemed like an anti-climax. Mr. Hallward-Driemeier did a fine job going back to his talking points and framing the debate according to the narrative of his clients. Mr. Whelan failed miserably from question to question.

Stay tuned to Towleroad for analysis once we take a few steps back.

And if you missed the earlier parts of this analysis, you can find them here: Part 1, Part 2, Part 3…