Posters promoting “straight pride” week at an Ohio university have been removed after it was determined that the message went beyond free speech, reports ABC News. 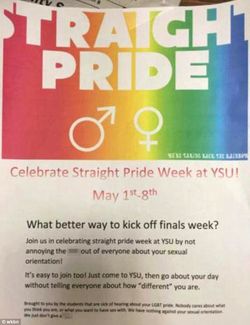 The posters in Youngstown State University encouraged students to "go about your day without telling everyone about how 'different' you are."

However, student leaders in consultation with university officials said that while they believe the posters were meant as satire, the message was inappropriate.

University spokesman Ron Cole added that the posters go against the college’s mission to create a diverse campus.

A statement from the student government reads in part:

“It has been brought to the attention of several SGA Executive Board members that ‘Straight Pride’ posters have been hung across campus, seemingly in response to LGBTQIA efforts to promote diversity and foster a culture of acceptance on campus. Though SGA respects the free speech of all YSU students, these postings were not authorized, contained vulgar language, and, unfortunately, miss the point of minority activism.

“When individuals belong to dominant societal cohorts (Caucasian, male, heterosexual, etc.) it is very easy to state ‘We have nothing against your sexual orientation’ and to claim that efforts to raise awareness are ‘annoying.’ For minorities who every day face discrimination and marginalization, such efforts are necessary – without zeal and persistence, sociology teaches that minority concerns very easily go by the wayside. Thus, dismissing the efforts of LGBTQIA students to push for equitable treatment as unnecessary is dangerous because it catalyzes discrimination, whether meant to do so or not.”

Watch a WKBN report, AFTER THE JUMP…