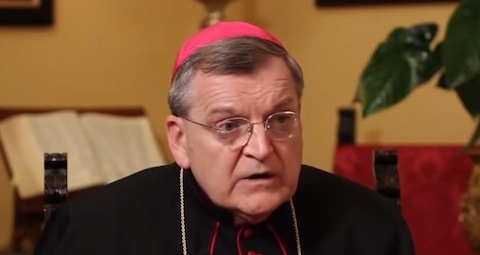 Cardinal Raymond Burke, the Catholic troll who was removed from his position as head of the Vatican's "Supreme Court" last year by Pope Francis, said at the UK's Oxford Oratory this week that voters in Ireland are worse than pagans for extending marriage rights to same-sex couples.

“I mean, this is a defiance of God. It’s just incredible," said Burke. "Pagans may have tolerated homosexual behaviors, they never dared to say this was marriage.”

Responding to a question about the marginalisation of faith in the public sphere, he stressed the primary importance of fortifying the family in its understanding of how faith “illumines daily living”. ‘The culture is thoroughly corrupted, if I may say so, and the children are being exposed to this, especially through the internet.’

He told the audience that he was “constantly” telling his nieces and nephews to keep their family computers in public areas of the house so that their children would not “imbibe this poison that’s out there.”

If Burke wants to keep his job for the foreseable future, he'd do well to listen to Archbishop Diarmuid Martin of Dublin, who told Ireland's state broadcaster RTE in the wake of the referendum vote that the Catholic Church is in serious need of a "reality check." 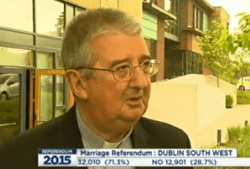 “It’s a social revolution that didn’t begin today. It’s a social revolution that’s been going on, and perhaps in the church people have not been as clear in understanding what that involved. It’s very clear that if this referendum is an affirmation of the views of young people, then the church has a huge task in front of it to find the language to be able to talk to and to get its message across to young people, not just on this issue, but in general…I think really that the church needs to do a reality check, a reality check right across the board, to look at the things it’s doing well, to look at the areas where we really have to start and say, ‘Look, have we drifted away completely from young people?'"