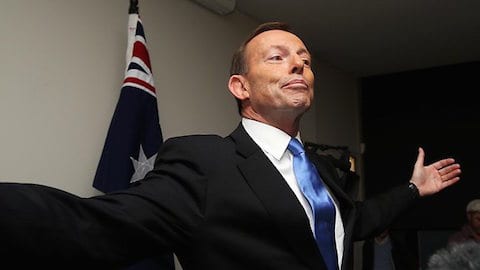 Ireland equality scored a major victory with their referendum to legalize same-sex marriage on Saturday with the populace voting 2:1 in favor of legalization. On the other side of the globe, Australia has even more support for the legalization of same-sex marriage with 72% of the population being in favor according to one major poll. One would think that with a parliamentary government that represents the will of the people that a referendum would be in the works. Sadly, Prime Minister Tony Abbott is not about to allow something like that to happen.

Abbott, who is a bit of an anti-gay ass, passed the buck to parliament when asked if Australia should hold a referendum to legalize same-sex marriage:

It really is a matter for the parliament.

Under the constitution, questions of marriage are the preserve of the Commonwealth parliament.

Except that anyone – a great many anyones; over 70% of Australia's anyones - are suggesting that the constitution needs to be changed in this respect in order to overturn the 2004 revision of the national Marriage Act to explicitly ban same-sex marriages from being recognized by national law. But as too often seems to be the case with socially conservative politicians, facts are optional little accoutrements that can be disregarded on a whim.