In a new interview with NPR, Boy Scouts of America President Robert Gates provides a timetable for when his organization will make a decision on whether to lift its ban on gay adults: 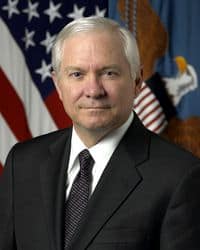 "I think that we will have a decision not later than October, but so far there has been no change. We need to reach out to our sponsoring institutions and talk with them about the potential change. We need to talk with donors and others so there's a process to be gone through here, but I think that it's inevitable that we have to change the policy and that's what I recommended, and we'll see as I say not later than October if the rest of the movement is in agreement with the position. But I think that change is the right thing for our movement."

"There would be a First Amendment protection for their right to do so, but from the National Council's standpoint gays would be permitted in units that want to have them," Gates said.

NPR notes some 70 percent of Scout units are sponsored by churches.