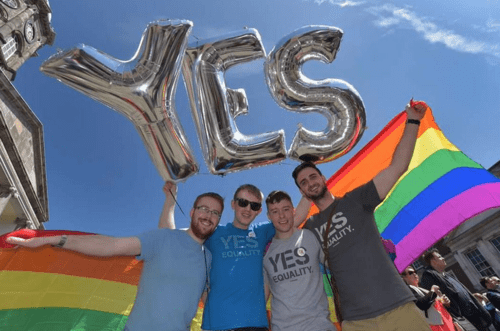 As expected, Ireland’s marriage referendum was a big win for the equality side.

With 43 of 43 constituencies reporting, the country has voted to amend its constitution to legalize same-sex marriage by a margin of 62.07% to 37.93%.

Over three million voters participated in the referendum, with all but one constituency (Roscommon – South Leitrim) having a majority ‘Yes’ vote. More on the turnout here.

The Irish Times reports the first same-sex marriages could take place before Christmas:

The resounding Yes vote will result in a new sentence being added to Article 41 of the Constitution. It reads: “Marriage may be contracted in accordance with law by two persons without distinction as to their sex.” The Irish version, which takes precedence, reads: “Féadfaidh beirt, gan beann ar a ngnéas, conradh pósta a dhéanamh de réir dlí.” It means that a marriage between two people of the same sex will now be recognised by the State and will have the same status under the Constitution as a marriage between a man and a woman.

To give effect to the amendment, the Oireachtas will enact the Marriage Bill 2015, which will state in law for the first time the principle that being of the same sex is no longer an impediment to marriage. Officials in the Department of Justice will begin drafting the legislation next week. A spokesman said the Bill would be prioritised with a view to it being passed by the Oireachtas before the summer recess.

Congrats Ireland on this historic victory!