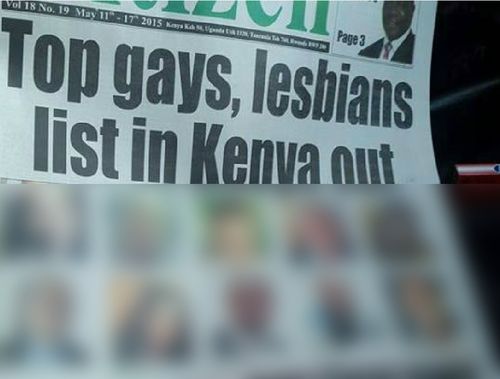 The Weekly Citizen, a Kenyan news organization based in Nairobi, has come under fire for publishing the names and photos of twelve outspoken advocates for the country’s queer rights movement. While the number of countries that criminalize homosexuality dropping, being gay is still a jailable offense in Kenya that can carry sentences of up to 14 years in prison along with sizable fines. There is a roiling debate amongst the conservative members of Kenya’s governing body and LGBT rights activists who argue that the country’s constitution implicitly protects queer-identified people if its language is to be interpreted literally.

That same tension between ideology and legality is what ultimately led to the Kenyan High Court’s decision to allow LGBT rights organizers to gather and form their own social programs meant to aid Kenya’s queer population.

“Every person has the right to freedom of association,” The court ruling expressed, pointing to the 36th Article of the Kenyan Constitution.  “[Including] the right to form, join or participate in the activities of an association of any kind.”

Though pro-LGBT organizers saw the decision as a victory, their hopes were shot through with worry of an inevitable social backlash that was likely to develop in response. Technically speaking, the Weekly Citizen in no way encouraged it readers to seek out the twelve activists it highlighted, but some of them saw the paper’s move as a hostile one.

"We are now walking targets," Denis Nzioka, one of those outed, explained to Gay Star News. "While some of the people on the list are open about being gay, some are not. It is putting every person's career, life and family at risk."