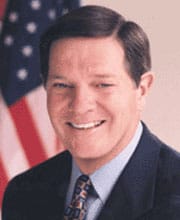 And in other news from former GOP House leaders who've had run-ins with the law, Tom DeLay stopped by a Houston radio show last week to say Americans must "rise up" against the Supreme Court if it rules in favor of marriage equality in June.

Listen to the scumbag speak, AFTER THE JUMP…