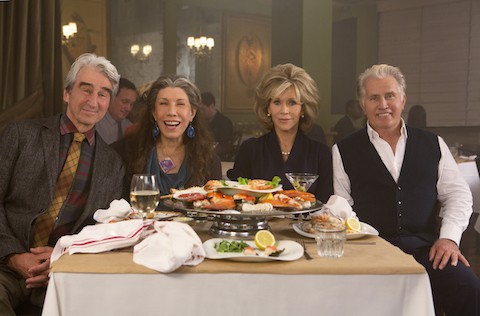 — Legendary actresses Jane Fonda and Lily Tomlin unite for the new Netflix comedy, Grace and Frankie, available to binge watch Friday. The series reunites the 9 To 5 co-stars as two women who come to depend on one another once their husbands (played by Martin Sheen and Sam Waterson) leave them to become lovers.

A lethal lip sync, action in Essos, and more TV this week, AFTER THE JUMP …

— After last week’s lazy lip sync on RuPaul's Drag Race, tonight’s final two will stomp the runway down, trust us. The dance-heavy episode puts the remaining queens through the ringer, culminating in a fan-favorite face-off. See who emerges victorious tonight at 9 p.m. Eastern on Logo.

— A trans character takes the spotlight in tonight’s episode of Banana, the anthology companion program to Russell T Davies’ Cucumber. Trans actress Bethany Black plays Helen as she deals with a jealous ex. Catch the episode at 11 p.m. Eastern on Logo.

— Between Jaime in Dorne, Tyrion’s trip across the sea and the uprising in Meereen, there’s a lot of action happening in Essos on Game of Thrones. Sunday at 9 p.m. Eastern on HBO, Tyrion catches a glimpse of Drogon, as he and Jorah Mormont head towards Meereen, while Sansa works to maneuver her new life in Winterfell with Roose & Ramsay Bolton. Check out our recap for the latest episode here!