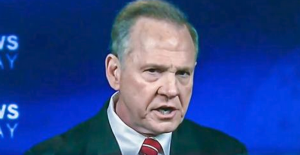 The Foundation for Moral Law, the Montgomery-based foundation started by Alabama Chief Justice Roy Moore’s, is pledging to defy the Supreme Court’s ruling legalizing marriage equality, saying that “the battle for traditional marriage will continue.”

The High Court’s ruling was illegitimate, according to the Foundation, which believes “at least 2 members of the Court’s majority opinion were under a legal duty to recuse and refrain from voting.” The Foundation has previously stated that Justices Kagan and Ginsburg should step aside because they have personally performed same-sex marriages. […]

The organization’s leaders say they believe churches, businesses, and individuals “are likely to come under attack for following their moral and religious convictions about same-sex marriage.” Executive Director Matthew Kidd went on, “When they are attacked, the Foundation will be there to defend them.”

The foundation is currently run by Moore’s wife Kayla.

Previous Post: « Watch The Amazing Moment Outside SCOTUS When The Court Ruled for Equality: VIDEO
Next Post: President Obama Breaks into ‘Amazing Grace’ at Funeral for Charleston Shooting Victim: VIDEO »