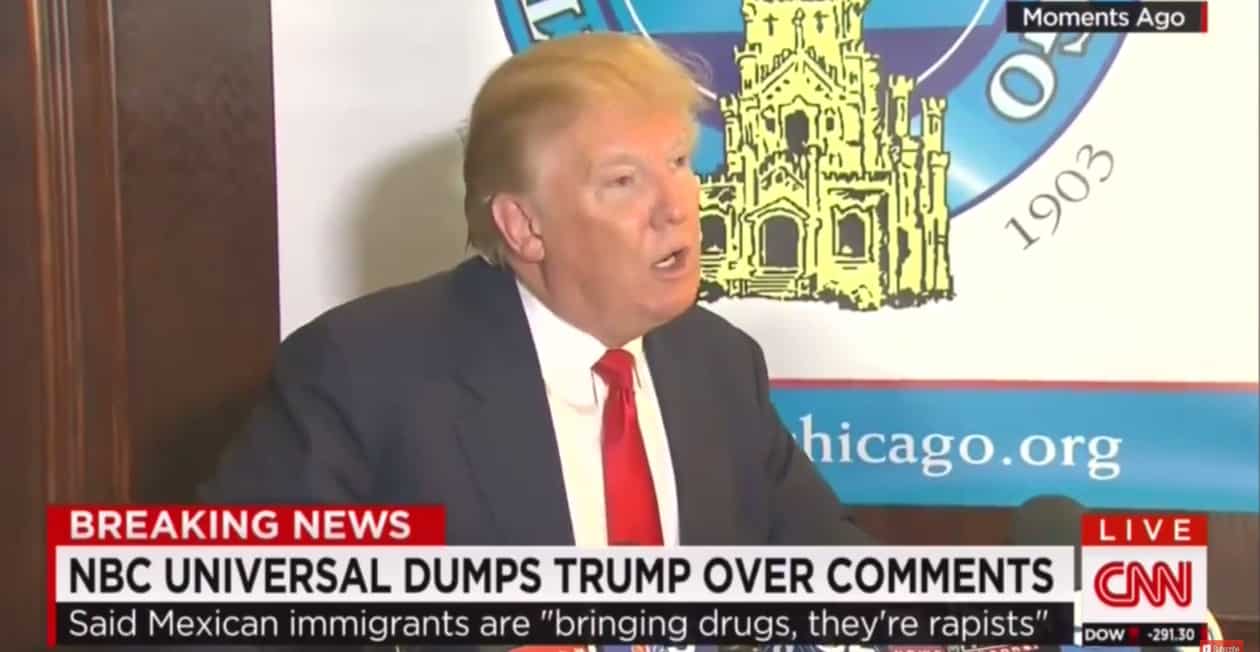 The tables have been turned on The Donald and this time he’s the one hearing, “you’re fired.”

The reality TV star, real estate investor and Republican Presidential hopeful was let go by NBC over comments he made at his campaign announcement earlier this month in which he referred to Mexican immigrants as “rapists” and “murderers.” Trump’s incendiary remarks did not sit well with NBC, which had broadcast the Miss USA and Miss Universe pageants, both of which Trump owns.

Trump previously stated he would no longer appear on his reality show, The Celebrity Apprentice, because of his presidential bid.

NBC released a statement about ending its business relationship with Trump:

At NBC, respect and dignity for all people are cornerstones of our values. Due to the recent derogatory statements by Donald Trump regarding immigrants, NBCUniversal is ending its business relationship with Mr. Trump. To that end, the annual Miss USA and Miss Universe Pageants, which are part of a joint venture between NBC and Trump, will no longer air on NBC . In addition, as Mr. Trump has already indicated, he will not be participating in The Celebrity Apprentice on NBC.

Last week, Univision said it would not longer air Mr. Trump’s pageants following his remarks and a Change.org petition urging NBC to end its relationship with him garnered more than 200,000 signatures, adding to pressure on the network to dispatch him.

At a press conference in Chicago, Mr. Trump stood by his comments and said that NBC had been unhappy with him since he decided to run for president and step away from his show.

“I told NBC I could not change my stance,” Mr. Trump said. “The fact is that my stance on immigration is correct.”

Watch a video of Trump responding to NBC’s announcement below:

Previous Post: « Jeremy Renner Gay Rumors Not a Concern for Giant Movie Star
Next Post: This Dad Biked 545 Miles For His Gay Son Who Died Due to HIV/AIDS: WATCH »