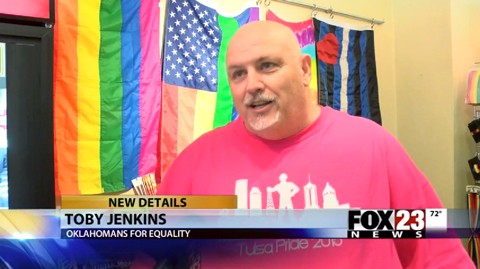 Earlier this year, Oklahoma lawmakers considered doing away with all marriage licenses to avoid issuing them to same-sex couples.

Now, the state's Department of Corrections has halted all prison weddings — apparently to avoid having inmates enter same-sex marriages.

If the high court rules in favor of gay marriage, corrections officials will alter department policy to allow an offender to marry someone of the same sex, spokeswoman Terri Watkins said.

“If same-sex marriages are ruled legal, then the policy will need to be changed. We will follow the law,” she said. …

The temporary halt drew criticism from Ryan Kiesel, director of the American Civil Liberties Union of Oklahoma, who said a state agency should be following the law as it stands now, not waiting to see if the law changes.

“To hit the pause button on marriages performed in prison is completely at odds with what the state of Oklahoma is obligated to do,” he said. “There is simply no justification for what DOC is doing.”

The DOC says it has no pending requests from inmates seeking to enter same-sex marriages. The current policy prohibits inmates from marrying each other, regardless of sex. The department normally allows inmates to get married two days a year. More from Fox23.com:

Toby Jenkins with Oklahomans for Equality is calling the new policy unlawful. He says same-sex marriage is already legal in Oklahoma and all marriages, including the marriages of opposite gender couples, should resume immediately.

Previous Post: « What To Watch This Week On TV: Premiere For ‘Sense8’ and Wanda Sykes on ‘Inside Comedy’
Next Post: VICE Documentary Explores What ‘The Truvada Revolution’ Means For The Fight Against HIV: VIDEO »