Couples in Guernsey County, Ohio will no longer be able to seek civil marriages because the county’s three judges have said they are getting out of the marriage business.

A local mayor, Thomas D. Orr, the mayor of Cambridge, has also said that he will stop performing marriages.

All the officials in question have said this change has nothing to do with gay marriage. However, the timing is suspicious. The news comes shortly after the Supreme Court legalized same-sex marriage nationwide and at a time when county clerks and judges elsewhere in the US are similarly attempting to get out of the marriage business to avoid having to marry same-sex couples.

Contacted by The Dispatch, spokesmen for the four officials did not say that they aren’t doing weddings because they oppose the June 26 U.S. Supreme Court ruling legalizing same-sex marriage. They cited other reasons….

A spokeswoman for Guernsey Probate Judge David B. Bennett [above, 3rd from left] said that he has never performed marriage ceremonies of any kind.

Guernsey Municipal Judge John Mark Nicholson [above left]  hasn’t performed weddings for more than a year, according to his assistant, Katie Archibald. “Our schedule is too busy,” she said.

A spokeswoman for Guernsey Common Pleas Judge David A. Ellwood [above second from left] said he “does not have the jurisdiction to perform wedding ceremonies.”

According to the Ohio Revised Code, county judges who are equivalent to municipal court judges have the power to “solemnize marriages,” but common pleas judges do not.

Cambridge Mayor Orr [above right] is “no longer doing marriages,” said Mary A. Green, his administrative assistant. “It’s been real bothersome to try to fit them in with his schedule.”

The end result appears to be that couples in Guernsey will need to travel to a neighboring county to have a civil marriage. A prospect some couples are not happy about: 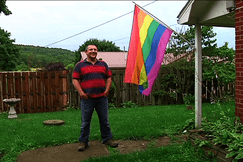 Levi Wade, a Cambridge resident, and his partner have the option of being married by a clergy member, but that’s not what they want. They planned a civil ceremony but so far haven’t found anyone in the county to perform their marriage.

“We didn’t want to go to a church. We wanted no religion involved,” Wade said. The couple was issued a marriage license on July 6 by the Guernsey County Probate Court.

“We could go to another county. I think that’s wrong,” Wade said. “This is my home, too. I shouldn’t have to cross multiple jurisdictions to do something that should be available to everybody.”

Watch a news report on what’s going on in Guernsey and an interview with Wade below:

(Photo of Mark Nicholson via The Daily Jeff)