ORLANDO. Tim Kaine makes unscheduled visit to Pulse nightclub: “Accompanied by former Arizona Congresswoman Gabby Giffords, herself badly wounded as a victim of a mass shooting at a constituent event in suburban Tucson in 2011, Sen. Kaine told reporters quietly, “This is a weird thing to say but I always hoped that the Virginia Tech one would be the worst one ever…as bad as that was, I hoped that nothing would ever eclipse it but, such as life we got work to do so.”

DATA COLLECTION. Facebook has been ordered to stop collecting and storing data from German users of WhatsApp: “The Hamburg Commissioner for Data Protection and Freedom of Information said Facebook was infringing data protection law and had not obtained effective approval from WhatsApp’s 35 million users in Germany.”

VIRAL. Reporter who yelled “Thanks a lot, b**ch” deemed the runner up in the first presidential debate: “The reporter, Al Jazeera English’s Kimberly Halkett, was apparently trying to get an interview with Mark Cuban when she was pushed out of the way. She was nahhht happy.” (Work unfriendly language below).

DISCRIMINATION. Urban Outfitters in LA refuses to let transgender customer use female dressing room: “Nicholas Gorham — who identifies as a “gender-fluid trans person,” uses female and gender-neutral pronouns, and primarily wears women’s clothing — was told by the attendant that she could not get a fitting room next to her friend Tamara, a cisgender woman.” 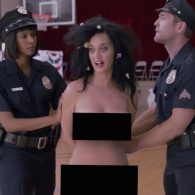 NOVEMBER 8. Katy Perry gets naked to encourage you to vote.

ANALYSIS. The presidential debate and misogyny: “Trump’s only policy proposal for women still seems to be ‘treat them like sh*t.'”

NO ONE PUTS BABY IN A CORNER. Madonna comes to the defense of Rosie O’Donnell.

Mess with my girl Rosie and you're messing with me!!! Cruelty never made anyone a winner. ❤️ #rebelhearts4ever pic.twitter.com/gvkF6HpU47

PRIDE. Serbian capital of Belgrade holds march despite security concerns: “Past Pride events in Serbia have been banned by the government due to concerns and threats of violence from anti-gay protestors. In 2010, the Pride march was marred by violence when rioters set fire to buildings and hurled petrol bombs and bricks at riot police, while chanting “Death to homosexuals.” More than 100 people were injured in the chaos, and subsequent Pride events in Serbia were banned, before continuing again in 2014.”

Previous Post: « Labor Department Sues Start-Up Co-Founded by Peter Thiel for Discrimination
Next Post: Get a Goofy Peek Behind-the Scenes at the ‘Will & Grace’ Reunion – WATCH »