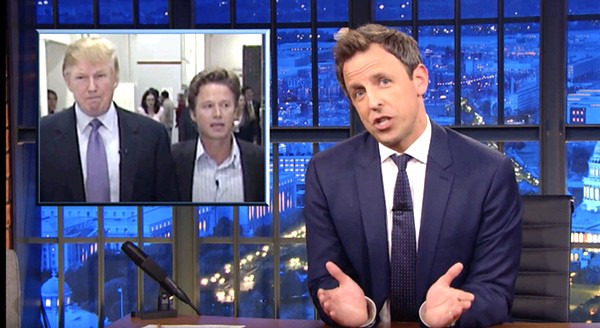 On Late Night, Seth Meyers took a closer look at the Donald Trump and Billy Bush tape in which Trump brags about assaulting women on a bus during an Access Hollywood shoot.

Meyers made three astute observations about the state of the race.

The first was about Trump:

The second was about the Bush family:

And the third was about American culture:

“It should be noted NBC suspended Billy Bush from the TODAY show for his words on this tape, which means there is currently a higher standard for host of the third hour of the TODAY show than there is for Republican nominee for president.”

Meyers looked at Paul Ryan’s attempt to distance himself from Trump without removing his endorsement:

“Paul Ryan is so spineless at this point they carry him to and from events in a bucket.”

Meyers then moved on to Trump’s explanation of the remarks as “locker room talk” at Sunday night’s debate. And he left us with an image that might scar us forever:

“That is not the way men in locker rooms talk. Second of all, this is the problem. Trump treats the entire world like the inside of a men’s locker room. And you just know he’s the locker room type who towel dries his hair while he’s buck naked with one leg up on the bench so everyone has to avert their eyes to avoid looking at his saggy ballsack.”