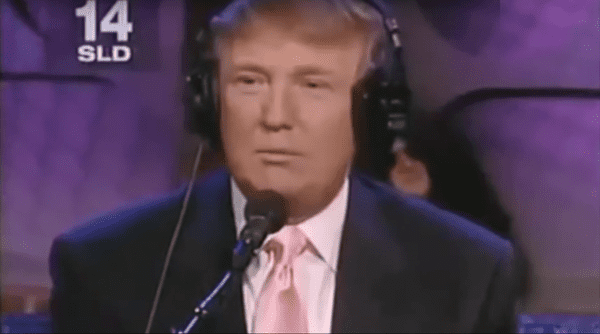 In a 2010 interview with Howard Stern, Donald Trump remarked that he had never had a gay thought in his life and refuted rumors that he engaged in ‘boner fights’ with other boys in prep school.

While discussing in lewd terms the details of golfer Tiger Woods’ sexual affairs, Trump told Stern, “One thing we’ve learned about Tiger Woods, for definite…he is not gay.” He then asked Stern, “Do you agree with that?”

“He is absolutely not gay,” Stern replied.

Stern stood by his previous statement, telling Trump that a couple of sexual experiences with another man “absolutely” means a man is gay.

When asked the number of times he had experienced sexual thoughts about another man, Trump responded, “Zero… not even a thought.” Stern replied by saying that made Trump “a real man.”

Trump added, “With all that I’ve had, I’ve never had a thought. There’s never been a big thought process, you know?…During the event there’s never a thought of Jimmy or Ronald or anything, no thoughts.”

Stern then brought up a supposed report or rumor that Trump engaged in “boner fights” with other boys in prep school. Trump denied ever partaking in such an activity.

CNN’s KFILE uncovered the audio conversation between Trump and stern.

Previous Post: « Keith Olbermann to ‘Führer Trump’: ‘You Killed a Part of Our Democracy’ – WATCH
Next Post: Christian Slater on Playing Gay in ‘King Cobra’: ‘You Gotta Feel the Fear and Do It Anyway’ »