ISN’T THIS RICH. Melania Trump wants to take on cyberbullying if she becomes first lady. Seriously.

ONE LESS DUGGAR? Josh Duggar’s wife Anna might be filing for divorce.

COVER. Bruno Mars takes on Adele’s “All I Ask” in the BBC 1 Live Lounge.

COVER UP. Penn State fined $2.4 million for doing little to nothing about Jerry Sandusky’s sexual abuse of young boys.

FOX ‘NEWS.’ Anchor Bret Baier reports story that Clinton indictment is imminent, surprised other outlets pick it up, then has to walk it back because, you know, facts: “So, as Raw Story and Media Matters and other outlets report today, Bret Baer was forced to walk back his story, although he still insists an indictment of Hillary Clinton will be forthcoming, because sources not in the FBI were brave enough to not go on the record with their names but assure him, days before the election, this will happen, so he can report it while holding on to a modicum of credibility.”

DOWN BALLOT. Dems say they would move quickly on the Equality Act if they get a big win in Congress on Tuesday: “With a Democratic House and Senate, the bill would absolutely be a top priority in the first 100 days,” a spokesperson for House Minority Leader Nancy Pelosi, Drew Hammill, told BuzzFeed News. “The votes for House passage are there today, even in the current Congress, if Speaker Ryan would just get out of the way.” 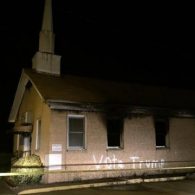 MISSISSIPPI BURNING. Hate crime investigation opened into arson attack on Black church in Mississippi. The church was tagged with the words “vote Trump.”

BY THE NUMBERS. The argument for an LGBT census. “When we can’t say things about who LGBT people are and what they need, we’re unable to develop public policies that serve them appropriately,” Durso told The Daily Beast. “It really kills me that we’re having these consequential policy debates and I can’t put a number on how many people are affected.” It’s an area in which the U.S. appears to be lagging behind.”

It's official. After 3.5 years #WhenWeRise is finally picture locked. Time to collapse in the fiancé's arms. #Florida here I come.