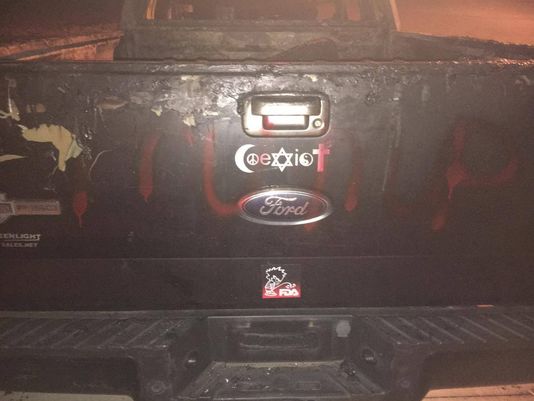 A transgender woman in Tennessee says someone set fire to her pickup truck after spray-painting “Trump” across the hood and tailgate in an apparent hate crime.

The woman, a disabled Army veteran who lives with her 3-year-old son, said the incident occurred early Saturday in the driveway of her home in Cookeville, halfway between Nashville and Knoxville.

The Tennesseean, which isn’t identifying the woman due to the nature of the crime, reports that she had no Hillary Clinton signs visible outside her home, but is active on social media against Donald Trump because she believes he would harm the LGBT community.

“Most of (the paint) got burned off, but one of the police officers pointed out that it said ‘Trump’ on the hood and the back,” the woman told the newspaper. “It just breaks my heart every time I walk past the driveway.”

After hearing a noise at about 3:30 a.m., the woman noticed that the door to her 2006 Harley Davidson edition F-150 pickup was open. Thinking she’d accidentally left the door open, she went outside and closed it. Thirty minutes later, she heard a horn honk and found the truck engulfed in flames.

The woman said local police told her they are treating incident as a hate crime, but authorities haven’t confirmed that. Chris Sanders of the Tennessee Equality Project reported on Facebook later Monday that his group has notified federal authorities.

The woman served eight years in the U.S. Army before being medically retired in 2007, after suffering from a severe brain injury and post-traumatic stress disorder while on tour in Iraq in 2004, The Tennessean reports. She said her 3-year-old son is still frightened from the incident.

“I’m just trying to live my life,” she said. “I wouldn’t hurt anyone.” 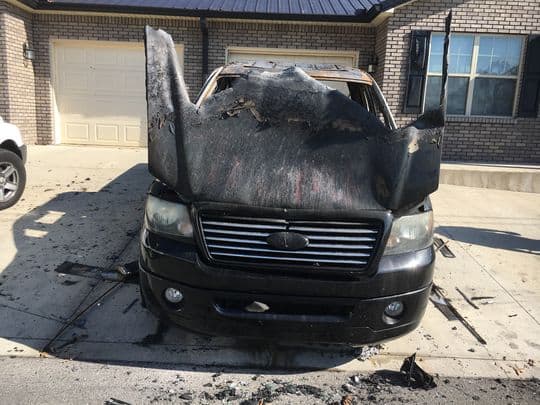