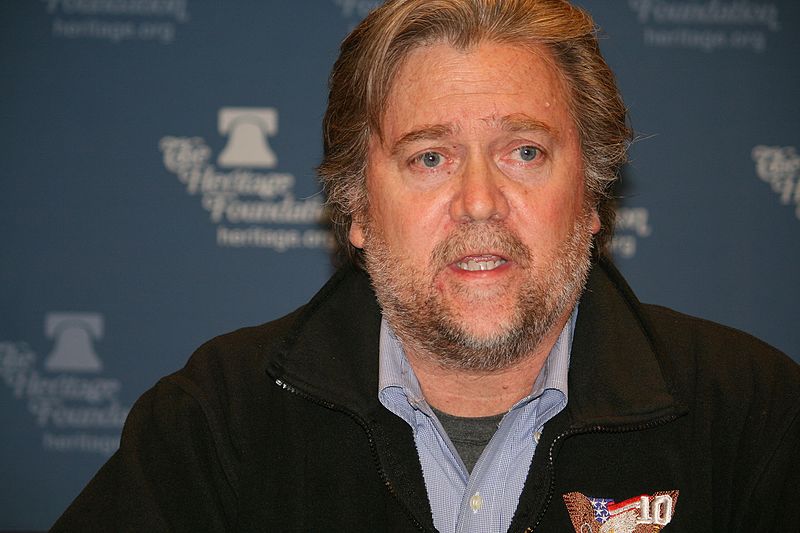 Stephen Bannon, Donald Trump’s chief strategist, reportedly resisted the shakeup of the National Security Council, and at one point, threatened to resign, according to a New York Times report. The shakeup, orchestrated by General H.R. McMaster, the president’s newly appointed national security adviser, was part of a larger bid to reorganize and consolidate his power over the committee.

Bannon denied the allegations when approached by reporters. “Absurd,” he told ABC.

Multiple White House sources who spoke to the press on condition of anonymity, however, say that Bannon had become resentful of Jared Kushner, the president’s son-in-law, whose profile in the West Wing has only continued to rise since President Trump took office. Bannon, they say, accused Kushner and his cohort of attempting to undermine his populist and anti-establishment approach. Kushner, they said, advocated for a reconsolidation of power.

According to another person familiar with the events, Rebekah Mercer, one of the GOP’s wealthiest donors, urged Bannon not to resign.

“Rebekah Mercer prevailed upon him to stay,” the individual said.

Another Republican operative corroborated the reports, telling reporters that Mercer attempted to assure Bannon that General McMaster’s move was in the NSC’s best interest. “Bekah tried to convince him that this is a long-term play.” they said.

The power struggle between Bannon and Kushner could also adversely impact Mercer’s access to the White House, and drastically diminish her influence.

“If Bannon leaves the White House, Bekah’s access and influence shrinks dramatically,” said one Republican who speaks to Mercer, a statement which appeared to add credence to reports that Kushner told people that he believes Mercer and her father––the billionaire Robert Mercer––have taken too much credit for the president’s victory in November. In fact, the two Mercers had initially thrown their support behind Texas Senator Ted Cruz, only joining the Trump camp after Cruz had to back out of the Republican primary.

Bannon’s supporters in the West Wing said Bannon, who assumed his role on the NSC after Trump enacted an executive order in January elevating him to the committee, said Bannon had joined the NSC in part to monitor Trump’s former national security adviser, Michael Flynn, who resigned in February amid reports that he intentionally misled Vice President Mike Pence about his conversations with Sergey Kislyak, the Russian ambassador to the United States. With Flynn out of the White House, they said, Bannon’s role on the NSC was largely obsolete, though he was allowed to keep his security clearance.

Bannon’s opponents in Washington have voiced their approval of the change in leadership.

“He didn’t belong on the principals committee to begin with — doesn’t really belong in the White House at all,” said Representative Adam B. Schiff (D-CA), the top Democrat on the House Intelligence Committee. “I hope that this is a sign that McMaster is taking control of the National Security Council.”

“It was wrong for him to be added in the first place, and it was right to take him off,” he said.