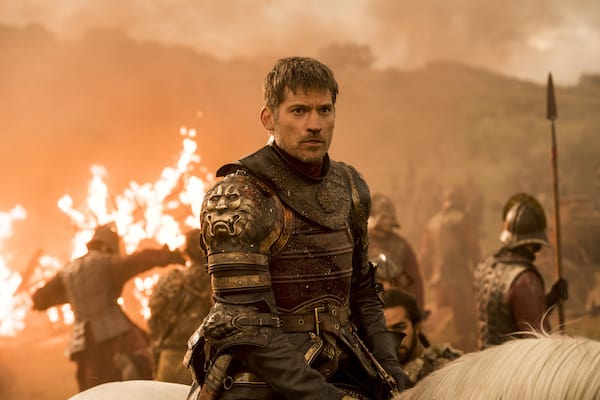 Last night’s episode of Game of Thrones, titled “The Spoils of War,” holds two distinctions: It is the shortest episode of the series, and it also holds the record for the most stuntmen simultaneously set on fire, which is an insane thing to even track.

It certainly paid off, because the stunning sequence was ablaze with drama and visual spectacle, creating one of the memorable scenes in Game of Thrones history.

In addition to that fiery action, there were more reunions, more scheming, more swordplay and more hot Tarly brothers to enjoy and pick over. Let’s dive in with our recap below! 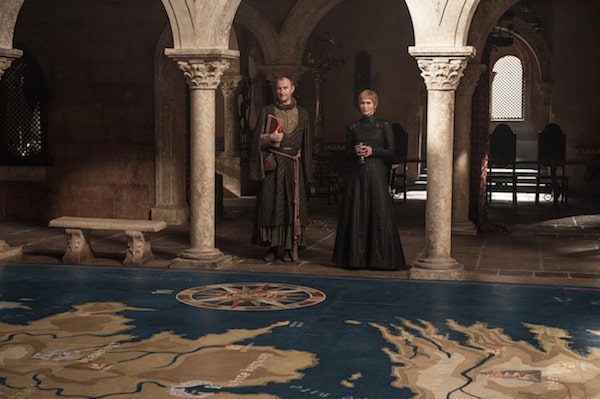 Cersei is having a pretty smug chat with a rep from the Iron Bank about how she’s about to pay back their full debt in one swift payment, thanks to the gold she’s swiped from Highgarden. The banker is practically tripping over himself to court more of Cersei’s business. Sure the Golden Company is great, heard great things, but if you take out another loan with the Iron Bank today, he can lock her in at an unbeatable rate, plus no service fees and she can use whatever ATM she wants!

Enjoy feeling like a winner while you can, Cers! 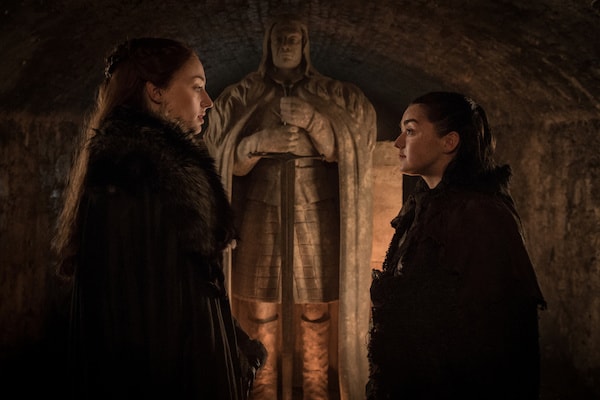 Littlefinger knows better than to put all his manipulation eggs into one impressionable Stark child basket. He finds Bran chilling by the fire in a Westerosi wheelchair, and he offers him a sort of strange gift. It’s the dagger that nameless assassin tried to kill him with in season one. You remember. Catelyn intervened and his direwolf ended up saving them both. Then Catelyn confronted Littlefinger about it, and he tried to claim he lost that dagger to Tyrion, and then Tyrion was captured for trying to get Bran killed even though he totally didn’t, and then it basically started the wheels in motion for the War of the Five Kings. But you knew all that already, didn’t you, BRAN? Of course, he did. He knows everything. And to prove it, he parrots back one of Littlefinger’s signature lines/my favorite Prince lyric that never was: “Chaos is a ladder.”

Before Littlefinger can shake the Stark boy down for how he knows about that, Meera enters. She’s there to tell Bran that she needs to be with her family (or what’s left of it) when things really get real. He’s like, “Cool, smell ya later,” and that’s not exactly the sort of send-off Meera was hoping for. After all, she dragged his ass through the snow when he was all Nick Cannon Presents: Wargin’ Out and her brother, Hodor and even poor Summer died protecting him. The least he can do is feign like he’s sad to see her go. Now that Bran’s become the Three-Eyed Raven, though, he’s not really a person anymore, let alone Brandon Stark. “You died in that cave,” Meera tells him before walking her fabulous furs and badass self right out of there.

Outside, there’s a visitor at the gate, and it’s none other than Arya Stark! Only problem is there are two bouncers taking their job a little too seriously. “Ooh, sorry, we’re at capacity.” She tries to explain that this is her home, she is Arya Stark, and they’re like “Hmm, you’re not on the list.” After a little more “Don’t you know who I am?” namedropping, they agree to let Arya in if she just stays still while they check in with Sansa. Of course, the second they turn their backs, Arya disappears.

Sansa finds her in the crypt, and their long-awaited reunion is sweet. They don’t dwell on all the misfortune that’s hardened them both since they’ve last seen each other, but it’s clear they also have both matured. “It’s a long story. I imagine yours is too,” Arya says. “Yes, not a very pleasant one.” “Mine neither, but our stories aren’t over yet.”

Sansa takes Arya to see Bran hanging out with his tree friends. Bran gives the dagger to Arya, which makes a lot of sense. She’s sure to get more use out of it. (Plus, anyone with a Valyrian steel weapon — including Brienne, Jaime, Sam Tarley and Jon Snow — will need them when the White Walkers descend.) Sansa’s suspicions are raised when Bran tells them he got the dagger as a gift from Littlefinger, because that is not a man that ever has purely altruistic intentions. 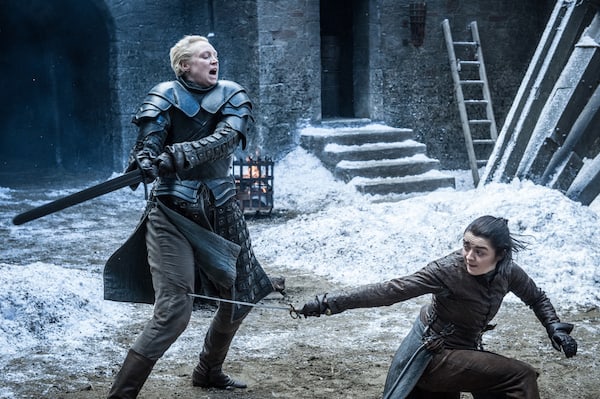 Arya spots Brienne training Pod and requests Bri starts training her. They spar, and it’s seriously one of my favorite sequences ever on the show. It’s thrilling, but tender all at the same time. There’s a mutual respect and understanding there that transcends so many levels. Here’s Arya, filled with admiration for Brienne and beaming with pride over her own mastery. And then Brienne is treated with someone who not only doesn’t see her as a freak, but she sees her as a hero. As they fight to an apparent draw, Brienne asks who taught her to fight like that. “No one,” is Arya’s reply. Clever girl.

As Sansa watches on, she’s less impressed. Or is she? It’s hard to tell, but she’s certainly feeling something. Before their scrimmage ends, Sansa storms off, leaving Littlefinger lingering, no doubt wondering how he can exploit this. 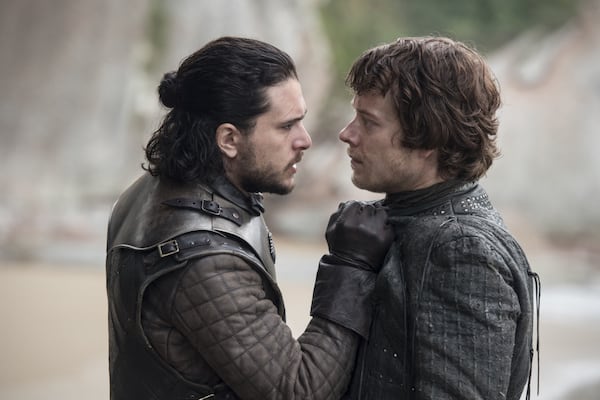 Dany is waiting for news from the Unsullied over at Casterly Rock, when Jon Snow comes up all “Look what I found! Look what I found! Come look! Come look!” While mining for dragonglass, he stumbled upon some old cave drawings of the First Men and Children of the Forest working together against the White Walkers back in the day. Daenerys is all, well, that certainly sounds serious. We definitely should team up … once you bend that knee.

Jon Snow, despite giving this whole speech about working together and trusting each other in the face of a common enemy still won’t be the first to budge on this. Ugh, men, right?

Before the debate can rage on, Tyrion and Varys have news. They took Casterly Rock! Hooray!

They explain that although technically they took Casterly Rock, the Unsullied are now stranded there, and also while they were busy with that, the Lannisters seized Highgarden and all the supplies from the very fertile Reach. This, of course, does not please Dany.

Later, Jon and Davos play a little 20 questions with Missandei. They want to know how she came to work for Daenerys. It feels a little like gotcha journalism with each follow-up question, but Missandei makes a clear case for what a benevolent and fair ruler Dany is. Maybe this will be what sways Jon to finally bend that damn knee.

That’s about when Theon Greyjoy comes ashore to ask Dany for help rescuing his sister. Jon resists the urge to beat him to death, because he did save his sister from Ramsay (but also he’s sort of partially to blame for Ramsay rising to power in the first place) (but also also he has suffered a lot for that sin already). Anyway, Jon doesn’t have time to parse out the ethical dilemma here. Plus, Dany’s not home anymore.

Which brings us to … 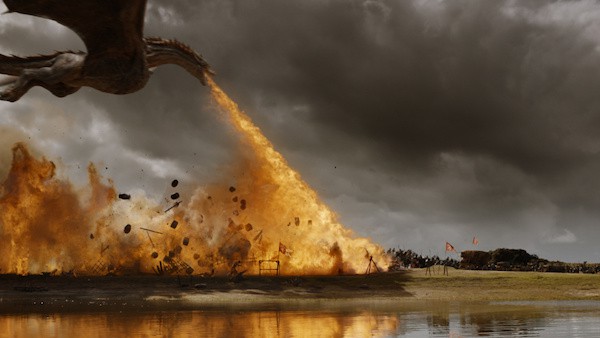 Meanwhile, at the Reach …

Jaime and Bronn are leading their caravan back to King’s Landing. Bronn wants that castle Jaime promised him, but he’ll have to settle for this satchel of gold for now. Don’t worry though, Lannisters always repay their debts!

Later, they get word the rest of their gold has made it safely to King’s Landing. Now they just need to get these supplies back.

What happens next is quite possibly the most stunning Game of Thrones conflict ever. The dragon descends and burns right through the Lannister phalanx. The Dothraki ride their horses through the men, slashing and screaming as they go. Dany does another pass, torching more men and more supplies. This is bad. Very bad.

Jaime is almost too stunned to process what’s happening around him. He sends Bronn to go to Qyburn’s giant crossbow thingy (it’s maybe called a scorpion, sorry too busy worrying about Dickon to look it up!). Bronn barely escapes a Dothraki and fires a bolt right into Drogon. The dragon is down, but certainly not out. As Daenerys goes to assist Drogon, Jaime sees an opportunity to take her down. He charges at her, but Drogon sees him coming. We see Drogon’s throat begin to glow (which is SO cool), but Bronn knocks Jaime into a lake just in the knick of time.

The last image we see is Jaime, weighed down by his golden hand and armor, sinking into the depths.

Is this the last we’ve seen of Jaime? (No, absolutely not.) But if (when) he emerges from this literal baptism by fire, will shedding his golden adornments help him shed some familial ties as well?

Previous Post: « Sen. Richard Blumenthal Fires Back at Trump: ‘Your Bullying Won’t Work Now…No One is Above the Law’
Next Post: T-Shirt Company Sparks Outrage Trying to ‘Re-brand’ Swastika as Rainbow Symbol of Peace and Love »