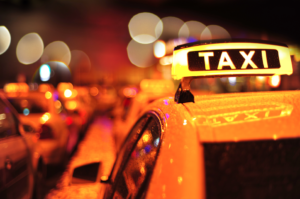 A yellow NYC cabbie who refused to drive a man when he learned he was gay — was found guilty on an infraction that got him a 10-day suspension, and fine of  $1105, before he was allowed back on the road.

The city’s Office of Administrative Trials and Hearings affirmed a complaint by the Taxi and Limousine Commission (TLC) that Martin Morrison violated three agency rules – unjustified refusal of service, discourtesy, and performing an act against the best interest of the public according to the NY Post.

The incident took place in June.

Yellow cab driver Morrison picked up two passengers – a man and a woman – on the corner of Fifth Avenue and East 43rd Street in Manhattan said Gay Star News. “Morrison turned around to ask the man if he was gay. When the unidentified man confirmed his sexuality, the taxi driver said he doesn’t drive gay people. He then crossed the intersection abruptly and let out the passengers, who had to get another taxi.”

TLC officials say Morrison’s behavior goes against the morals of the agency.

“The individual’s behavior in this instance was inappropriate and wholly unacceptable, and the penalties are appropriately severe,” said TLC Commissioner Meera Joshi in statement.