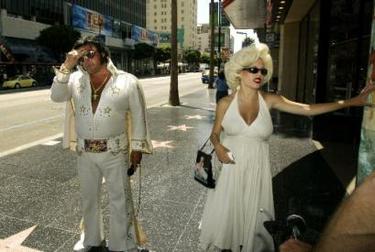 I couldn’t help but smile when this photo was featured as the splash photo on the Drudge Report the other day, as the lead to an article on the 102 degree heat. Elvis and Marilyn here are just two of the many characters that stand outside Mann’s Chinese Theater on Hollywood Boulevard pimping themselves out for tourist photos. On any given day you might see Yoda, Princess Leia, Charlie Chaplin, Frankenstein, etc — all valiantly playing their roles for Joe Smith from Nebraska and his two kids.

What folks didn’t see (and I did because I worked across the street) was that about a block away from the theater is a little dive of a restaurant called Shelly’s Cafe. I’d often find the characters there during lunchtime, seated around a table eating lunch in their costumes. It was odd to see Marilyn Monroe dining with Superman and the Lone Ranger, slouched in their chairs, sweating from the heat, costumes disheveled, sipping on sodas. Particularly because when the masks were off it was painfully obvious that there were no movie stars underneath, just weary, aging, wrinkled, penniless, out of work actors.

I’ll never forget the day when a female tourist walked into the cafe and her eyes lit up when she saw them. But happiness quickly turned ugly when she walked up to their table and said, “Aha! Marilyn, Elvis, Batman, and…..who are you, Don Juan???” The grizzled actor, thoroughly offended that he could be mistaken for anything else than what he was, puffed up his chest and his robes and snapped back at her (and the restaurant), “I’m Obi Wan Kenobi!” The woman quickly hurried out.

Or the day when beer-belly Batman in his gray leotard raged into the cafe because he had read that they had cast a young actor in the next Batman movie and he hadn’t even been considered. Spiderman and Marilyn quickly went into therapy mode and bought him a drink to drown his sorrows.

Hollywood dreams — shattered. Then they all marched valiantly back to their posts on the Walk of Fame. Ready to be discovered.