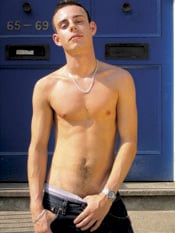 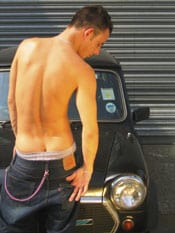 “For so long I limited myself by telling myself I couldn’t be a rapper because I’m white, English and gay,” Qboy, aka Marcos Brito, tells The Guardian. “Now I’ve become a rapper, it’s made me realise you only limit yourself — no one else limits you.” Qboy recently released a debut EP called Even the Women Like Him. Perhaps the most surprising thing about this white gay rapper from the UK is that his music is surprisingly listenable. Samples are available on Qboy’s website. For those in hip-hop that aren’t ready to hear from a gay rapper, he has these lyrics, from “Bent Spittin”:

And many others can rap also but they all seem to like women
QBoy’s combining the two like Muller Crunch Corner
With a cute sexy body you’d love to see in the sauna
Got an English accent Madonna can’t hi-jack or steel
And I’m chatting frath to hand claps but still keeping it real
I want to see your bodies movin’, dancin’, sweatin’ all night
And feel open-minded when you find it’s a fag on the mic

He even has words for those in the gay community who don’t feel like they can except hip-hop as part of their culture, from “Q.B.O.Y.”:

Thankfully, the style of the rap is much closer to Eminem than Vanilla Ice. But Qboy’s not the first white rapper from the UK, so he does have some competition. Anybody who’s heard The Streets (aka Mike Skinner) and his CDs Original Pirate Material and A Grand Don’t Come for Free knows there is true white hip-hop genius overseas. It will be refreshing nonetheless to see if Qboy can make his mark in what is thought of as the most homophobic musical genre.