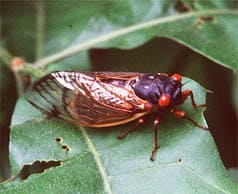 I grew up in the leafy suburbs of Chicago. I remember a summer when the 17-year cicadas returned from their extended hibernation underground and crawled up the thick trunks of the oak trees. It was like an invasion. To those of you unfamiliar with these creatures, when they emerge from the ground they look like big caramel-colored bees without wings. After they get a few feet up the tree (which takes a couple days) they stop, freeze, and break out of their exoskeletons, leaving their shells behind like ghosts on the tree trunks. At this stage the cicadas are bigger and with wings, and you better not get anywhere near those trees because these big red-eyed meaty mothers will be flying and hissing momentarily.

However, the crazy people at the Washington Post are suggesting that you eat them, actually pluck them from the trees when they are in this state (just after emerging), and pop them in your mouth.

Jacques Tiziou, a Frenchman-turned-American who lives in a tree-fringed colonial in Northwest, will gather as many as he can, eating a few right away and saving the rest for later. “You’re going to grab one and put it in your mouth alive,” he says with a twinkle in his eye. “You have to.”

The dude still has cicadas in his freezer from 1987.

David George Gordon’s cookbook offers a recipe for cicada-topped pizza. As an accompaniment, he suggests a crisp chardonnay or a semillon blanc. He also recommends you begin drinking as you cook, “to fortify yourself.”

Fortify myself? There’s not enough wine in California.

The males will create their trademark din, and cicadas of both sexes may startle and annoy the people in their midst, but the insects do not sting or bite. For many birds, mammals and reptiles, the cicadas will provide weeks of meals.

Startle and annoy? As children, they used to scare the shit out of us. I can’t imagine plucking a wriggling cicada off a tree. Thus, the next part of the article makes me particularly freaked out, especially the use of the word “creamy”:

There they will molt, taking about an hour to squeeze out of their dust-colored skins. Once they have broken free, it is your moment to strike: Pluck the creamy white adults off the trees. Gather as many as you desire for the culinary adventures ahead. Admire their red eyes and furled wings.

If you don’t want to eat your cicadas right off the tree, cookbook author Gordon recommends placing your bounty in the freezer. “It’s a dignified death; they drift off into a deep sleep and never feel any pain,” he says…Then serve with toothpicks and a selection of condiments for dipping, ranging from sweet to savory: chocolate sauce, honey, melted cheese, ketchup, mustard. Voila: cicada fondue. The females, loaded with eggs, are more of a bite than the males, whose abdomens are largely hollow, in part because of the anatomical structures that allow them to make noise. Zyla likens the dry-roasted males to an “air-puffed Cheeto.”

Might I suggest gnocchi? Or burritos? How about cheese-covered poppers? I just love the feeling of cicada eggs in my teeth, and I hope you got as much out of this article as I did.