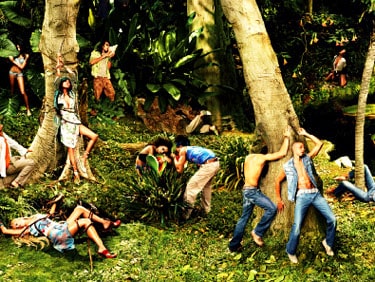 I love Diesel’s latest print campaign, which borrows “fruitfully” from Hieronymous Bosch’s well-known painting “The Garden of Earthly Delights”. Scholars have suggested that Bosch’s painting is a depiction of the Garden of Eden had the fall of Adam and Eve never happened — and the ensuing chaotic debauchery; unbridled lust as man’s downfall. I would suggest that Diesel’s campaign comes from the opposite direction, harkening back to the sexually carefree 70’s. Diesel’s point of view is that their brand is an oasis of sexual expression — wardrobe malfunction be damned — where all breasts should feel free to escape. All-in-all an eye-catching tease with more than a few direct nods to the early 16th century Dutch master. Check out these details:

In the Bosch grouping, a man sucks nectar out of a textured fruit resembling a cactus and a woman sits nearby with her legs wrapped suggestively around a ripe fruit. In the Diesel ad, a man appears to nibble at the end of a cactus, while the woman behind him cradles a suggestively erect cactus between her legs. 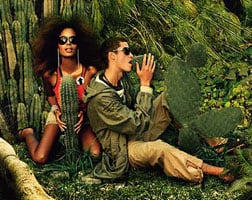 Fish in art often represent fertility, creativity, and the unconscious mind. Sounds like a wet dream to me:

Speckled fruit or speckled flower? Either will do for a good face sucking: 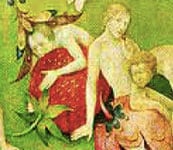 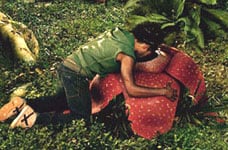 Finally, fleshy hunks getting fed by big peckers is just as just as hot today as it was then: 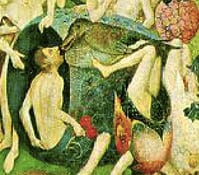 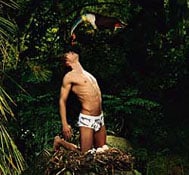 The campaign, whose tagline is Nature: Love It While It Lasts, waxes nostalgic for an Eden that only exists in the minds of denim purveyors. Buy our jeans now! Nonetheless, it seems like a perfect time to channel Bosch, as our world teeters on the brink of a global warming crisis and spins forward into an era where privacy, sexuality, and religion are dominating social issues.

Thanks BFT, I hadn’t seen this article, but it seems to be an interesting sign of the times.