I briefly mentioned Chris McKim’s artist bio-doc Wojnarowicz: F* You F*ggot Fker (their grammar, not mine) earlier this year as one of the best unreleased documentaries that I saw in 2020. Voila, here we are, and this incredibly vibrant film is now out in the world. Big, boldly stylized and defiantly queer; it’s a documentary about an artist that, for once, feels truly in sync with its subject’s style. “I’m not gay as in ‘I love you’, I’m queer as in fuck off!” If it was one of last year’s best unreleased films, so now it is one of this year’s best films. I love it.

And perhaps part of what makes McKim’s film so interesting from the very start is that David Wojnarowicz is not an artist whose work and life has been excessively covered in film. (Keith Haring and Jean-Michel Basquiat, as brilliant as they were, could probably stand to sit the next few years out if you know what I mean)

Wojnarowicz died in 1992, leaving behind a catalogue of work that is daring and strange and confronting. He was a painter and collagist as well as a writer, musician, photographer and activist. He used his art as a weapon, all but vomiting up the rage within him as society ignored AIDS. But that fire was only so strong because he was so passionate about the people and the things he loved. You have to be, I guess.

Release: Still screening via Kino Lorber’s virtual cinema platform if you want to find a local venue and support them. Otherwise, it will be out on DVD in May. Pre-order now for delivery days earlier.

Living among the “junkies and cocksuckers” of New York City’s lower east side, Wojnarowicz was unapologetic in his homosexuality and McKim’s film is wise to give his life story the cinematic equivalent of a punch in the face. It’s rare to see a film like this and actually imagine its subject liking it instead of grimacing at its sanded edges and good taste; Robert Mapplethorpe would be jealous.

Talking heads are largely absent, although the artist’s contemporaries (hello Fran Levowitz, you get that speaker’s fee!) are on hand to clarify history, and offer wild anecdotes and touching memories. For the most part, Wojnarowicz utilises audiotaped journals spoken by the artist himself (going back to 1976) as well as video recordings as he goes about organizing AIDS protests, discusses cruising Central Park, Ronald Reagan, his artistic collaboration with Peter Hujar and romantic relationship with Tom Rauffenbart.

Interspersed throughout are cutaways to seemingly unrelated images—a scorpion in silhouette against the New York skyline, a monkey on a television program, footage of bloody meat processing, predominantly all snipped from his own super 8 films. But the lack of any larger context only heightens the abstract nature of the film and allow the viewer into Wojnarowicz headspace. Even newly filmed establishing shots of a more sanitized NYC are well-integrated.

From its opening moment, with its reversed American flag, there’s little time for its audience to breathe. I guess it mirrors a Wojnarowicz art show in that way. The narrative immediately picks up with the incredulity of an AIDS-themed art show losing its funding due to the politicised nature of the work to be displayed. “It could be construed as critical,” he tells a ABC news producer over the phone from his apartment—filmed here on video by friend Phil Zwickler, news reports about the fall of the Berlin Wall playing in the background. “But if you’re doing a show about AIDS there’s absolutely no way that you can separate politics from AIDS. Bottom line is, I may be dying of AIDS in America in 1989. Isn’t that political?” He was, after all, the man in the famous photograph wearing an iconic jacket that read, “If I die of AIDS – forget burial – just drop my body on the steps of the F.D.A.”

From there, while it charts a traditional linear narrative, there is never a dull moment. Audio allows us to get a greater understanding of Wojnarowicz’s work (emphasised by rather seamlessly executed graphic effects) before we return to the controversy around art funding from right-wing conservatives in government and their lobbyist cronies. His eloquence is beautiful to hear, his art a wonder to behold, the story of his death a painful, tear-soaked passage.

Chris McKim also directed last year’s Freedia Got a Gun and the 2016 Daytime Emmy-winning Out in Iraq alongside Oscar winner Eva Orner. He is clearly an exciting voice in non-fiction, a filmmaker whose work could easily straddle experimentation and clear-eyed narrative. Editor Dave Stanke also deserves a shout-out by name as his work is critical to F* You F*ggot Fker’s success, fusing a ‘90s documentary collage style with fast-paced narrative. The artwork that gives the film its provocative and attention-grabbing title is stunning, of course. But the real thought one has by the end of this extraordinary film is that for all the anger and disease that could come through his work, he was a man of incredible empathy and passion whose vision of both art and society at large is as deeply relevant now as it was then.

Oscar chances: The Academy’s doc branch will occasionally go for films about artists, but never those this queer or this in-your-face.

This review also appears on The Film Experience. We appreciate their partnership. 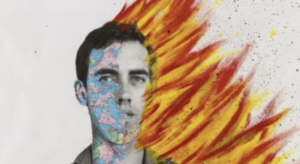 Previous Post: « Mars Helicopter To Attempt Massive NASA Milestone This Week — Controlled Extra-Planetary Flight
Next Post: More than Half of US Adults Have Received At Least One COVID Vaccine Dose -CDC Reports. Other Half Will Be Harder. »