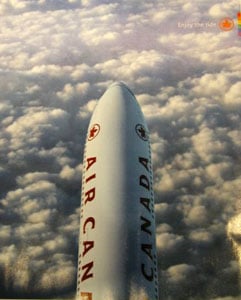 I borrowed this image from SpaceChik’s site. He’s recently decided to shut down his blog, so I wanted to wish him thanks and happy trails for the future. It’s been entertaining reading his site and I wish him the best.

Now, a couple thoughts on this Air Canada ad from the Toronto Pride Guide, which is accompanied by the caption “Enjoy the Ride”.

It’s kind of shocking that an airline would be so progressive in its marketing as to suggest that its jets are sexual devices intended to probe your orifices. At the same time, it’s a wildly and refreshingly liberal advertisement.

Is it offensive that companies marketing to gays and lesbians feel that they must approach the community from a sexual angle in order to make any kind of impact? Or, is it indicative of the statement the gay community makes that this is the only way they know how to market to us?

Do you think Donald Trump/Mark Burnett will sue Air Canada for appropriating the ad campaign for Marquis Jets showcased by the women in the second episode of The Apprentice which utilized planes as symbols of phallic prowess?

And finally, is it really that smart for the airlines to suggest that they’re fucking us over?