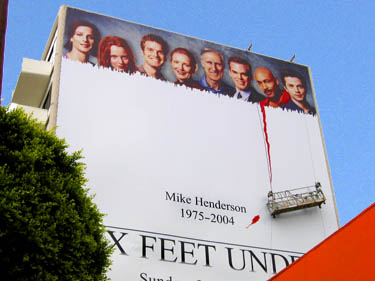 I saw this mentioned on a couple other sites, but hadn’t seen a photo that really did it justice. In a city where just about everywhere you look there’s an advertisement for something, it’s refreshing when the occasional flash of brilliance shows up.

This 8-story three-dimensional ad for the upcoming season of Six Feet Under translates the dark humor of the series by enacting a “real life” drama in the death of poor Mike Henderson. His metal gondola apparently collapsed as he painted the mural on the side of this building, sending him plummeting to the ground below, leaving a long streak of red paint in his wake. The viewer’s momentary shock is quickly replaced by comic recognition, particularly for those familiar with the show’s trademark opening death scenes. Now I’m really looking forward to the season opener this Sunday.