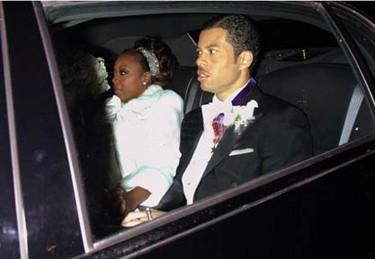 A reader sends in this photo of Star Jones and banker Al Reynolds, married over the weekend in a star-studded ceremony attended by guests like Hillary Clinton, Spike Lee, and The View co-host Barbara Walters.

Rumors questioning Reynolds’ sexuality have circulated on the internet for months, with The NY Post reporting his attendance at a gay Halloween bash dressed as a stripper in a white Speedo and bathrobe. Other reports have him at a Fire Island party in another Speedo, but this time dressed as Bam Bam from the Flintstones. In his juicy Filth column, Billy Masters reported on the Halloween party: “When my spy asked what his costume was, someone in the crowd yelled, ‘He’s pretending to be a straight guy marrying Star Jones.’ Reynolds corrected him by stating, ‘I’m a male stripper.'”

Whether or not Reynolds’ Halloween costume choices and context in which he chooses to wear them are indicative that he’s a gay man marrying a woman is anyone’s Gest.

So does this photo show “a man frozen in fear” as our reader noted to us, or does it depict a couple intent on preserving the sanctity of the important institution whose protections are afforded to heterosexuals whose love for one another merits the label of marriage?

The wedding apparently went off without a hitch. Reports co-host Walters,
“I smiled a lot.”