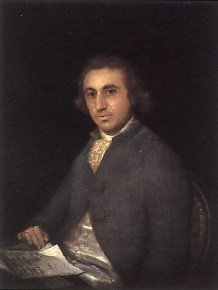 Spanish master Francisco de Goya has always been considered a virile heterosexual — the father of perhaps 20 children, husband to Josefa Bayeu, lover to the Duchess of Alba. But a new book, Goya y Las Mujeres, by Spanish art historian Natacha Seseña suggests that the famous painter (widely considered the father of Modern Art) also had a never-before-discussed homosexual relationship with his friend Martin Zapater (pictured here in a Goya portrait). Letters written at the height of Goya’s creative years suggested a back and forth correspondence (Zapater’s responses haven’t survived) with romantic and sexual undertones.

One letter reads: “My Martin … I am desperate to go with you because I like you so much, and we suit each other so well, and it’s impossible to find anyone comparable, and I imagine what my life would be like if we could be together and hunt and drink chocolate and spend the 23 reales I have in your company … it would be the greatest happiness in the world.”

According to an article published in The Independent, “One letter ends: ‘Ah! take, take a thousand embraces,’ and adds ‘take what I cannot give you,’ accompanied by two sketches, of male and female genitalia. The letters exude… ‘high-voltage homoeroticism.'”