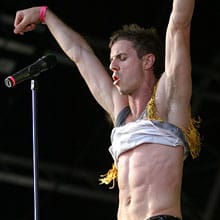 Gay group Scissor Sisters performed their hits “Comfortably Numb” and “Take Your Mama Out” on Saturday Night Live over the weekend in an episode that featured host Colin Farrell in a parade of remarkably uninspired skits. Has SNL lost it or what? Rather than present a ribald commentary on current events and play upon their celebrity host’s soft spots as they used to do, SNL instead now seems to depend upon a disjointed series of schticky sight gags (cockroaches and crows?). I was disappointed, although the “key party” skit did amuse me.

Meanwhile, Scissor Sister Jake Shears speaks out on a variety of topics in a juicy interview with the Guardian.

On conformity: “I’m speaking in very general terms here, but you get a room full of urban gay professionals together in America in 2004 and you won’t be able to tell the difference between them and a bunch of right-wing Republicans. A lot of the gay mainstream is so desperate to assimilate into straight culture that they’ve turned into their own high school principals, except with a spoonful of ketamine up their nose on the weekends.”

On flamboyance: “In my teens I didn’t know what I wanted to do with myself, so I did everything. For my high school gong show I sported a wig and belted out ‘I Will Always Love You’, calling myself ‘Whip-Me Houston’. I won a broken down motorcycle.”

On closet cases: “You know that trillion-selling singer who everyone has sat around for years wondering, ‘is he or isn’t he?’ He is. Same with that blockbuster movie star who’s been obsessively primping and pruning in front of the cameras since the mid-Eighties. If everyone who was gay in the entertainment industry came out, our world would instantly become a very different place.”

“A Cut Above” [The Guardian]