Jason Ritter (who bears a striking resemblance to his late father John), pictured below, plays a gay role in the film.

Something else that caught my eye recently is the “his” version of the “his and hers” movie poster featuring a just-too-small terrycloth towel (click for larger version) that reveals the bottom half of somebody’s furry little butt. We can only hope it’s Jason Ritter’s. 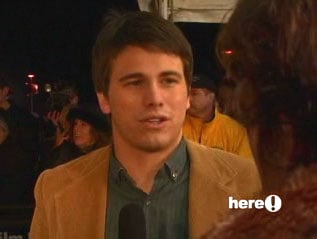