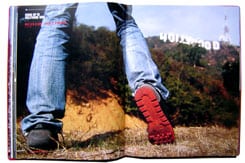 France’s illegal street artist Space Invader has put out another book chronicling his graphic enhancement (or some might say defacement) of public property. Space Invader’s graffiti of pixellated aliens, inspired by the video game of the same name, has become ubiquitous in the sprawling city of angels. Invasion: Los Angeles — Mission Hollywood records his furtive decorating habits in a glossy format that flies in the face of his subversive urban milieu. (via art.blogging.la)