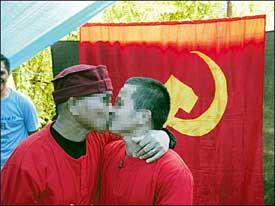 Communist rebels in the Philippines held their first gay wedding on Friday, in a ceremony that was dubbed “propaganda” by military and police officials of the Philippine government.

In a report on the Communist Party of the Philippines (CPP) and their attitude toward gay rights, the Philippine Daily Inquirer describes the detailed love story that developed between two rebels leading up to the “wedding”, in which the two men, 21 and 54, held bullets to symbolize their “commitment in the armed struggle.”

Military and police officials expressed dismay at the proceedings, saying the ceremony was being used to entice gays to join the New People’s Army. Said the officials: “They don’t have a god.”