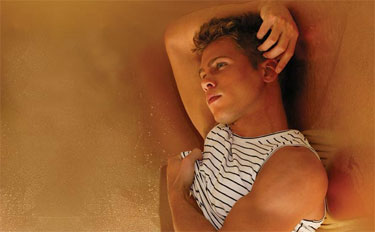 While Hunter is swimming in Arkansas and Rob paints the town with Tori, “embedded model” Kevin Peake has been spending some of his time flaunting the underwear, swimsuits, and T-shirts of New York designer Ami Sanzuri, and Jon Jonsson has been busy modeling/blogging in Singapore.

Jon blogs in to clear up a misconception about his opinion of the Big Apple, which he had dissed in earlier posts: “I don’t hate New York City at all, I just think the people who live there and love it are completely insane.”

On the streets of Singapore he’s been stopped on the street by fans who ask him questions, mainly about Manhunt and modeling, but he’s sick of these questions you Singaporeans! They’re just too normal, and that’s no fun at all.

Writes Jon, “I’m still waiting for a completely original question like, ‘Would you rather have wings to fly or spend the rest of your life wanting them?’ I don’t know, something crazy like that.”

It’s a query he may only get in New York. And one we should all ponder.