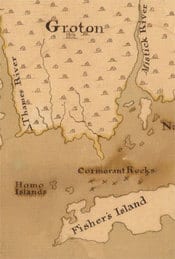 I really love old maps, so when Paul, one of my resourceful Connecticut correspondents, sent in this map of part of that state from the 1760’s with evidence that Fire Island may not be the gayest island off the coast of New England I was more than interested.

Now I’ve been to Fisher’s Island with an ex-boyfriend. It’s a lush, old money, privatized, preppie settlement populated with WASPS, golf courses, and Golden Retrievers. I had no knowledge whatsoever of the Homo Islands, off to the NNE, however, and that’s perhaps where I should have gone with the ex, considering no sex happened that weekend at the family summer cottage with the cousins and nieces and nephews around.

So, according to Paul, the Homo Islands are now called the Dumpling Islands, North Dumpling and South Dumpling, to be exact. This map was part of evidence submitted for a colonial law suit brought to the Privy Council in England in the 1760s. On earlier sea charts they were called the Hammock Islands (with variants Hummock and Hommock). Paul suggests that “homo” was a shortened version of Hommock. But who knows? Perhaps Governor John Winthrop, Jr., who owned the islands until the 20th century, was flying Abe Lincoln and his boys in for the weekend.

Some additional factoids from Paul: one of the more recent owners of the island calls himself Lord Dumpling. There also are structures on the Dumplings, one called “Moon Mound” and the other, a sort of Stonehenge, called “Temple of the Four Winds”. Sounds like remnants of a big gay bash to me…

So there’s your Towleroad history lesson for the day.