There’s something extremely off about the latest Brawny commercials. While they’re extremely homoerotic, there’s something about them that’s positively creepy. Maybe it’s just the lecherous sounding voiceover, but I couldn’t help watching these again and again and wondering how they ever got approval.

The two commercials I’m talking about are found here and are called “Role Reversal”. The first features a Brawny man making a birthday cake for his wife. While he’s making the cake (in creepy Stepford Wives fashion) dollops of icing splatter suggestively on the countertop. Then, when he’s finished with the cake, he walks toward the camera, and I don’t think it’s the tube of frosting that’s stuffed into those jeans. 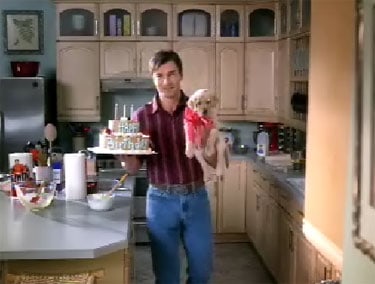 A little weird, but it doesn’t really register till you see the second one:

While watching the first spot on TV, a wife tells her husband she wishes he were more like the Brawny man. Her husband falls out of bed and into a dream where, lying next to the dog dish, a suggestive dollop of frosting splatters on his face just as the Brawny man leans over him to wipe it off.

The shirtless man jumps up (now he’s the size of a child) and tries to slap at the Brawny man, who easily overpowers him.

The husband finally submits to the power of the Brawny man, lets himself be lifted onto the counter…

and suggestively ices the cake while the twisted narrator sings “Happy Birthday to You”.

I’ve posted before on Brawny’s homoerotic tendencies, but the Brawny guy on these ads strikes me at best as some kind of mentally imbalanced Ken doll and at worst (particularly in the second one as it suggests a child) as some sort of creepy pedophile. Not hot at all.