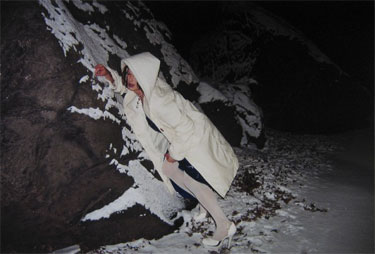 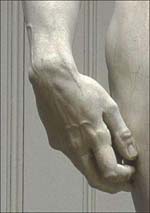 Barry over at Bloggy alerts us to a Joe Ovelman exhibit in D.C. featuring his Snow Queen series of photographs in which Ovelman takes quite literally the slang term that refers to a black man who only dates white men. He shot the series late one night in The Rambles section of Central Park, infamous as a spot for clandestine sexual encounters. I’ve posted about Joe here before.

Something’s finally been cleared up. Scholars have finally decided that the cock on Michelangelo’s David is not too small. While David has always been seen as a model for physical perfection, many have seen his “pisello” as lacking in enthusiasm. I think it’s safe to say that Michelangelo was not a size queen. However, scholars at the Dutch Institute for Art History say that a person in “pre-fight tension” may experience a bit of shrinkage in that area.

So, I can only imagine what’s going on in ultimate fighter Matt Hughes‘ spandex.

Finally, the Project Runway of the art world got underway in (where else but) Soho yesterday, as hundreds lined up to audition for Artstar. It’s said to be the first art-based reality show but I think someone beat them to it.

Brooklyn artist T. Whid said of the show, “It will be just a bunch of desperate artists doing their best to flatter art world honchos as they watch their dignity being stabbed out like a stale cigarette.” Will it be any better than New York magazine’s “predictably silly list” of artists to watch?

Wait and see, but since “the artists who are chosen will not be forced to live together in a loft or perform competitive art stunts or cry on camera” and “there’s no hot tub” here, what else is there? Isn’t that what Reality TV is about?