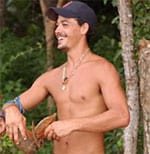 Is it me or does a new season of The Amazing Race start every ten minutes?

My interest in this show died a few seasons ago but it could be sparked again with the addition to the line-up of Rob Mariano (aka Boston Rob) whom you’ll remember (or not) became a reformed homophobe on Survivor: Marquesas after sexual tension with nurse John Carroll came to a boiling point.

After Marquesas, John told The Advocate, “Yeah, he called me after the episode where he called me the “big-time queer” and we had a nice long conversation. I explained to him how damaging those words are. The first thing he said was that he didn’t realize the word ‘queer’ was bad. He thought that gay people referred to each other as ‘queers.’ I said, ‘Yeah, there is definitely a faction that does that, Rob. But the difference is that they’re gay themselves. But you use the word ‘queer’ as if it were a derogatory word for any number of ethnicities. He has true remorse about it.'”

Besides, Rob is just so dumb and pretty.