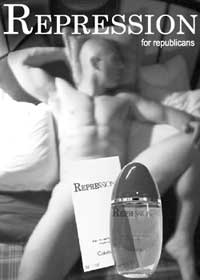 The Beast on why the Gannon/Guckert story continues to matter and why it will continue to be a thorn in the heel of the Bush administration. Some excerpts:

“What’s really got the Republicans’ panties twisted is that Guckert’s story is an uncomfortable reminder of their own inner conflicts, a crack in the wall of denial they’ve built in their minds to separate the standards by which they judge others from the realities of their own personal behavior.”

“Secrecy and denial are as much essential components of Bush’s White House as they are of a closet homosexual’s lifestyle. Penetrate the mirage, reveal the lie, and people get angry. Right-wingers are mad because, in essence, Guckert is Bush—a talentless pretender firing a cannon in a glass house. I’m not saying you can’t be a gay Republican. I’m saying you can’t be a gay Republican and make any sense. It’s one thing to believe in smaller government and free markets, but to choose to support a party that explicitly finds you repugnant as a human being beggars the imagination.”

It’s the Hypocrisy, Stupid [The Beast]