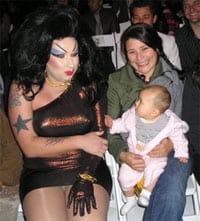 Laurie Pike from LA.com shows off some photos from Grant Krajecki’s Grey Ant fashion show in L.A. where the designer hired a cadre of impersonators to fill seats, which is, I suppose, a great way to get stars to show up to your event.

Faux freaks that were in attendance —Cher, Michael Jackson, Dolly Parton, Divine (who has apparently lost a few pounds in the grave) and Boy George.

I love the look on the infant’s face — utter fascination (that may soon turn to utter terror and coulrophobia for the rest of the poor kid’s life). (via A Socialite’s Life)