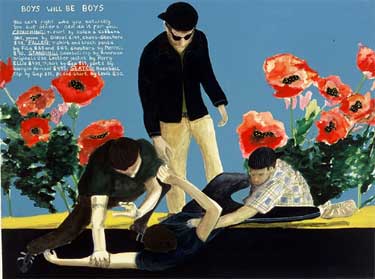 James Wagner presents a look at the gallery show of Carter Kustera, whose latest series focuses on violence, treats it like a fashion spread in a magazine, and parodies the way entertainment prettifies the ugly elements of social interaction for consumer purposes. Looks like an interesting show.

Addendum: I couldn’t help but notice the irony of this post appearing just after the post on the gay-bashing in North Carolina, which happened by chance, as the violence was reported early this morning. If you can’t read the caption to the painting above (it’s larger on Wagner’s site) it reads: “You can’t fight who you naturally are, but others can do it for you.” Applies to many areas of our world at the moment.