Raw Story reports that Republican Paul Koering, a state Senator from Minnesota who voted against an amendment to that state’s constitution that would ban gay marriage, has revealed that he is gay.

Koering: “Somebody who is possibly in the closet and uses their bully pulpit or their position to bash gay people or to make gay people’s lives difficult… and are in essence leading a double life — people like that need to be exposed for the hypocrite that they are. And I sometimes find that, I feel that the people that you find who are hollering the loudest and who are putting people down the most are the ones that have the most to hide. They’re so uncomfortable in their own skin that they have to tear everybody else down to make themselves feel good.” 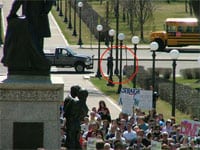 Meanwhile, state Senator Michele Bachmann tried to take advantage of an OutFront rally against the amendment to ban gay marriage, circumvent the Senate committee process, and force a floor vote on that amendment as thousands of ban opponents rallied outside the Capitol. The move didn’t pan out for Bachmann and she went outside to watch from a hidden spot behind some bushes. However, a Minnesota blogger caught the coward.

Bachmann has said, among other things, that if the amendment goes through children will have to learn that homosexuality is normal: “This is a very serious matter because it’s our children that are the prize for this community. They are specifically targeting our children.” More on this video in which she calls homosexuals “evil”.