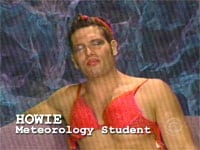 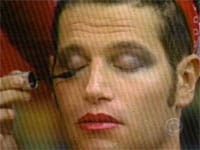 Once again my summer TV schedule is being consumed by the video crack that is Big Brother. Did anybody catch the show last night? Personal shopper Beau Beasley came out to meteorology student Howie, who momentarily looked lost for words, and then commented, “You have a nice little musculature” (or something like that). Howie doesn’t seem fazed by much, certainly, as he demonstrated by donning this get-up and putting on a show for the other housemates. Meteorology student? Body-obsessed? Drag-inclined? Beau commented that he thought Howie was “bi-curious“. Ya think?