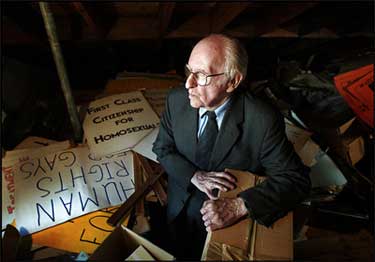 There was a moving article in the Washington Post this weekend about 80-year-old gay rights activist Franklin Kameny and his trove of papers and artifacts from the early days of gay activism over which several foundations and museums are salivating.

Kameny, a World War II veteran, was fired in 1957 for being gay, and after fighting the dismissal and petitioning the Supreme Court unsuccessfully, he found the Mattachine Society, the nation’s first gay rights group.

In his old age Kameny is still outspoken and thinks for himself:

“He lives alone. On Fridays he stops by Lambda Rising to get his copy of the Washington Blade. He never misses an episode of cable TV’s ‘Queer as Folk’ and ‘Six Feet Under’ (the latter features the off-and-on relationship of two gay men) and keeps himself occupied with meetings and events for organizations such as the Gay and Lesbian Activist Alliance and his neighborhood association. He has no family, except for his 77-year-old sister, Edna, who lives in Long Island. He has remained — except for a love affair with a man named Keith in what he refers to as the ‘golden summer of 1954’ — steadfastly single. (But don’t think for a minute that he wants your help or needs your sympathy, because he’s taking ‘quite good care’ of himself, thank you.)”

In fact, he has always spoken for himself:

Kameny: “If society and I differ on something, I’m willing to give the matter a second look. If we still differ, then I am right and society is wrong; and society can go its way so long as it does not get in my way. But if it does, there’s going to be a fight. And I’m not going to be the one who backs down. That has been an underlying premise of the conduct of my life.”

It’s refreshing to see activists like this getting the credit they deserve from the MSM.