of his CD Hotel as part of Amazon’s 10th anniversary celebrity deliveries. They spent most of the time in the bedroom, which was entirely appropriate considering that’s where Moby intends the CD to be used: “Do you know anyone who has insomnia? It’s kind of designed for people who want to fall asleep.”

Moby seemed more interested in the bulldogs Millicent and Isaac than his doting fan. But the big surprise came when Moby got down on all fours, and tried to wrestle the dog’s blue chew toy away from it. Still, McDonald tried to play it cool: “Moby was exactly who I thought he would be. He seemed very kind of like cool and centered and kind of…that creative quirkiness that you’d expect.”

The dogs seemed to work Moby into a heady bacterial nirvana. “It’s going to be hard to leave.” And Moby was worried that he would be delivering to a crazy person?

Still, I think I’d much rather have Moby fondle my dogs than have to worry about Clay Aiken lurking outside of my house

, waiting to shove his package in my face. 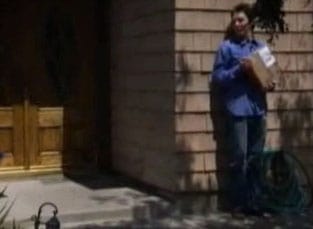