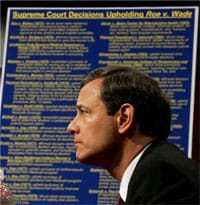 The questioning of SCOTUS nominee John Roberts began this morning. The nominee dodged specific answers to questions regarding Roe v. Wade and repeatedly sparred with Senator Joe Biden who accused Roberts of “filibustering” and at one point said, out of frustration, “Go ahead and continue not to answer.”

When questioned on the possibility of faith influencing his decisions, Roberts replied, “There’s nothing in my personal views based on faith or other sources that would prevent me from applying the precedent of the court faithfully under the principles of stare decisis.” Stare decisis is the doctrine that courts are bound by previous court decisions over time.

Additionally, “Roberts said he never turned down a request for pro bono work while in private practice, including a case on gay rights. ‘I think it’s right that if there had been something morally objectionable, I suppose I would have.'”