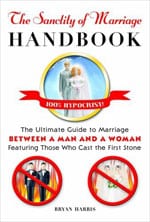 That’s the title I might give the advance copy of The Sanctity of Marriage Handbook that I’ve had an opportunity to read. The tidy little tome by Bryan Harris (who, the book notes, “lives in sin with his girlfriend”), which bills itself as “The Ultimate Guide to Marriage Between a Man and a Woman featuring Those Who Cast the First Stone,” is an amazing little briefing on the haters of the current political arena — an anthology of conservative religious and Republican wingnut hypocrites and their views (and actions) regarding marriage.

One by one, from Bob Barr, Ann Coulter, Rush Limbaugh, and Henry Hyde to Jeff Gannon, David Dreier, Ken Mehlman, and former Rep. Ed Schrock whose “complaints about gays were nowhere near as graphic as the descriptions he left of himself on gay dating phone lines,” right wing pundits and politicians are laid out to dry by Harris in easily digestible segments, each followed up with a snappy “Morality Score.” Here’s Ann Coulter’s:

Harris finishes up the book with a slate of “(Dis)honorable Mentions”, folks who are not the “generals” leading the charge to defend heterosexual marriage but who might be held as accomplices in the crime. Finally, for expository purposes, Harris includes text from both the Defense of Marriage Act and the Federal Marriage Amendment.

He also points out the more important purpose behind this “Cliff’s Notes” of Republican wingnuts:

“Despite the hypocrisy demonstrated by the subjects of this book—folks who grab the Bible with one hand and play grab-ass with the other—this is not just a book about hypocrites. It is about people who cultivate hate, who, oftentimes, legislate it, and then disguise it as being for the good of all.”

This book is an amazing little resource and given its diminutive size (the paperback book measures 5″x7″), I think I’ll probably be stuffing some stockings with it over the holidays, at least the stockings of those who think the Right can do no wrong.