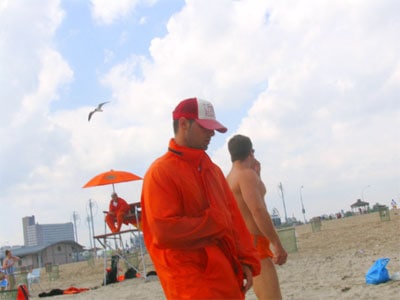 This was created from a photograph I took at Coney Island in late June. I had been given a photo assignment from Where magazine to shoot five different spots in Brooklyn, one of which was the famous amusement park/beach. It was a cool day at the beginning of the summer and the beach wasn’t that crowded — a few swimmers, a few lifeguards socializing in their bright orange jackets.

As I snapped shots, I happened to catch this one with a gull coming in to the frame. It was something of an ‘accidental’ shot. I hadn’t even lifted the camera properly – notice the diagonal horizon. Yet ultimately, the awkward perspectives were what I liked about the shot. I also thought the lifeguard in the foreground was sexy in the mysterious way that lifeguards can be.

To create the banner I photoshopped out the lifeguard’s companion and retained the simple elements as best I could.