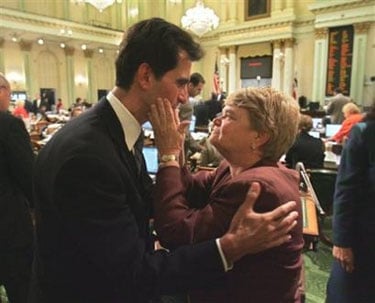 By a vote of 41-35, the California Assembly approved a bill legalizing same-sex marriage in that state on Tuesday, making the California legislature the first in the country to approve gay marriage. The bill, introduced by San Francisco Democrat Mark Leno (above, celebrating with Sen. Sheila Kuehl) had failed by four votes in June but Leno got it through this time. “Do what we know is in our hearts,” he told the Senate. “Make sure all California families will have the same protection under the law.”

The bill now heads to the desk of Governor Arnold Schwarzenegger, who had no comment last week after it cleared the Senate. What the Governator will do is anyone’s guess:

Randy Thomasson, president of Campaign for Children and Families: “Schwarzenegger can’t afford to sign the ‘gay marriage license’ bill. He’ll actually become a hero to the majority of Californians when he vetoes it. The Terminator should announce without delay that this bill is dead meat.”

To send an email visit here
(thanks frank)